Realme 7 and 7 Pro are coming on September 3

The china company Realme is holding an event on September 1 in China for its new X7 series smartphones, and two days later, it will unveil the Realme 7 and 7 Pro. Ahead of that, known tipster Mukul Sharma has revealed complete specifications of the handsets. The launch event will begin at 12:30PM IST (7AM UTC) has announced Realme’s Indian branch. It seems like the 65W fast charging tech, which Realme 7 series is confirmed to feature, will be reserved to only Realme 7 Pro. The vanilla Realme 7 is said to come with 30W fast charging solution; however, it may flaunt 90Hz refresh rate display and a slightly beefy battery compared to the ‘Pro’ model. 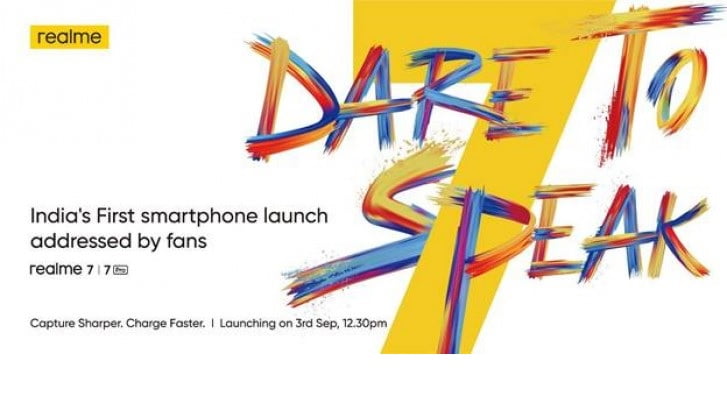 The handset will allegedly ship with a 6.5-inch IPS LCD screen that’ll bear FHD+ resolution, 90Hz refresh rate, and 120Hz touch sampling rate.The phone is said to be powered by MediaTek Helio G95 SoC coupled with 6GB/ 8GB and 64GB/ 128GB storage options. The handset could feature a side-mounted fingerprint scanner for security and quad camera setup at the back. The setup will reportedly include 64MP Sony IMX682 (f/1.8) primary sensor, 8MP ultra-wide sensor, 2MP B/W sensor, and 2MP macro sensor with (f/2.4). The cameras are said to support 4K video recording at 30fps and UIS Max video stabilisation. The front camera of the phone may sport a 16MP snapper with f/2.0 and 73-degree field-of-view.